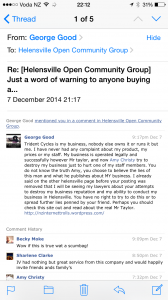 It seems yet another Helensville local has discovered that dealing with Grant King (or “George Good” as he names himself on the Helensville Community Facebook page) isn’t exactly a box of chuckles.

The last time Grant King took someone to Court (me), it didn’t work out so well for him that time either:

Kings only appeal for self-defence? His self-authored fantasy-land blog he has been writing – again, anonymously (although in linking to it, he confirms his authorship).

Helensville local Amy Christy is to be congratulated for fronting up Grant King and his illegal businesses.

King admits 3 times that he is the owner and operator of the business, Trident Cycles.

This “trifecta” disclosure is in direct contrast to what King has been telling other statutory parties to date, and this link has naturally been posted to them for their attention.

Goodness only knows what his Chinese pals are saying about King right now.

I only hope that Amy Christy is not fraud victim number 72.

1 thought on “Amy Christy from Helensville – come on down!”