Approximately 8.5 years ago, a 32-year career criminal by the name of Grant Norman King, who had dramatically harmed the lives of 69 other fraud victims causing approximately $3.5 million dollars in fraud, chose to do the same to victim # 70 (me).

I was to be his last victim, and the consequences of King choosing me as a target proved (and still prove) to be a disaster for him.

After 8.5 years, King has experienced extensive media exposure, a raft of criminal convictions (including a jail sentence), an indefinite bankruptcy, and in indefinite restraining order.

There has also been no further reports of King committing any new criminal acts since this website went live in 2011.

Has this website done its job, or would the removal of the website (it’s online presence statutorily reinforced by a landmark court order), simply invite King to begin re-offending, safe from Google’s ever-present eyes?

I’m thinking these things through, and would welcome any feedback on this musing. Grant King has been spinning like a wobbly top recently, trying to convince all and sundry that he was never the subject of sexual offence charges against a minor (i.e. a convicted pedophile) in 2004.

As always, King is about to be taken to the cleaners for trying to dupe those around him.

A “taster” of what is coming:

Convicted of 2 counts of Indecent Assault involving a girl aged between 12 and 16.

Judge did not consider King suitable for home detention.

According to the people who were at the Hearing and Sentencing, King blubbed like a baby as he was led away.

Once the SST Offenders Database on Grant King is live, this website will link to it.

It seems it is now the Bay of Plenty to which Mr Grant King has turned his feral attention:

Word is that King has moved out of Helensville and into Waihi township.

Appropriate notifications are now being sent to various contacts within the area, including local media, and the Police.

What’s very interesting to me is the activities Mr King is now apparently engaged in, whilst on community detention via electronic monitoring.

Out of jail in September 2016, and soon to be back in trouble again just two months later.

Dumber than a sack of hammers. 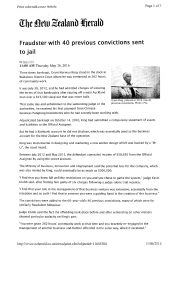 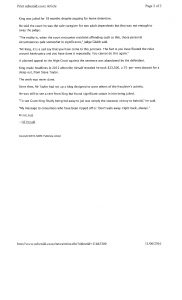 I suspect Kings Lawyer told King not to further try the patience of the Court.