Sarah Harris from Stuff should dig a little deeper into these two, and she would discover that they are both:

As a former client of the Mihakas has written:

Mike Edmonds claims to be a builder, but has minimal abilities in this field.

What he does have is the gift of the gab which makes him sound convincing.

Do not give him unsupervised access to you home – he and the “workers” he employs will help themselves to your property.

Don’t be fooled by by his stories, it’s just him trying to gain your confidence.

What building he does really doesn’t impress the Council Building Inspector.

He’s not beyond doing plumbing, gas fitting, and electrical work, all well below par and will need doing properly by registered/qualified trades people so it is compliant and covered by your insurance.

He likes to circumvent any regulatory authority and passes the so called “savings” onto you, when in reality he charges less because he’s not worth much more than the minimum wage, pockets 100%; pays no tax on this cash income and you’ve become complicit in something illegal.

Meanwhile he siphons off building materials from your job to others he has on the go.

His terms of endearment are not at all flattering, nor is his breath which suggests he’s full of sh**t, because that is what it smells of!

Karina Mihaka has the balls and bash in their relationship.

Apparently, she controls Mike on a shot leash that can lead to the odd black eye if he stands up to her.

She runs a 2bit company called Troubleshooting Builders which like the name, leads to trouble – sub contracted to Spencer Henshaw doing maintenance and repairs on Housing NZ homes.

How does a bankrupt do this?

Better still how does a Company doing Goverment (tendered) contracts fail to do their homework on sub contractors?

They now have another company Off the Grid, their foray into self sufficiency and accompanying publicity is just a front to advance their business.

They may offer guarantees but the reality is will they be around in a year or two?

My advice to anyone with the idea of dealing with these two Muppets on any level is to run, run, run because if you don’t it will cost you dearly in the long run, one way or another.

YOU HAVE BEEN WARNED!

Sarah Harris from Fairfax Media, and Spencer Henshaw Builders have now been advised of the situation at hand – I trust they will take care of their Consumer populations appropriately, and not allow the Mihakas to create even more fraud victims.

It seems the Mihakas are a wee bit upset about this post (well, Karina is, and being the mouth AND the trousers in the relationship, she has, in true Karina Mihaka style, completely lost the plot – thanks to my “eyes in the sky” for bringing this to my attention, and please see the “Reply” section of this post for some truly vintage Mihaka prose): 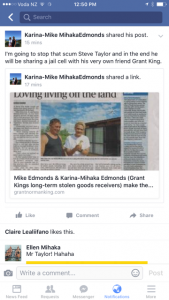 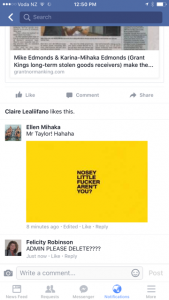